A Friulian family of decisive and visionary people, who for generations have cultivated the land without ceasing to look ahead. A family of farmers who have always dedicated themselves to wine-growing in the hills overlooking the Judrio river and on the plains washed by the Natisone river. A small local production that has grown, year after year, until it has become synonymous with excellence on an international level. A growth that has not altered the attention to detail, the care of every single vineyard, the artisanal approach to each stage of production.

At the crossroads of waters, lands and peoples, the SIRCH vineyards concentrate the immense wealth of different histories and geographies in a single area. To the east, the Judrio river marks the border between Italy and Slovenia, to the west the Natisone river defines the renowned Friuli Colli Orientali DOC area.
Theodahad’s, king of the Goths (534 A.D.), already attested to the strong production of wine in the area of Cividale, where bunches of grapes and vine shoots are often depicted in Lombard art. Embraced by these two waterways – between the municipalities of Cividale del Friuli, Prepotto and Premariacco – SIRCH thus unites, under its colored labels, a long history of geographical and cultural boundaries, but also of meetings and mergers that have enriched these lands.

Native varieties alternate with international ones, experience is combined with research and the fragrant and mature character that distinguishes SIRCH wines is born. Elegant whites, the pride of Friuli, are flanked by structured and complex reds. The common denominator is the terroir with its high-quality standards, today sought after and known even abroad.

The origin of SIRCH wines

The reliefs, an alternation of marl and sandstone, reach between 100 and 350 meters above sea level and form what is called “ponca” in the local language, Friulian. The Julian Alps to the north protect these lands from cold currents, while the Adriatic Sea laps them with the benefits of a gentle, constant breeze.
As early as the end of the 19th century, this area was described as: “Interesting, geologically speaking, is the morainic group to the north of Udine, which goes towards S. Pietro al Natisone and Cividale; the soil is due to the Eocene period. S. Pietro and Cividale are noteworthy for reds and table wines.”
From harvesting to vinification, we take into account the plot of land, exposure to the sun, the variety of grapes and the age of the vineyard, to keep intact the characteristics of those products and then choose how to blend them and enhance them to satisfy the tastes of our consumers.

The variety of SIRCH wines

Along the slopes of the Friuli Colli Orientali DOC area, our wines originate from both international and autochthonous grapes. Chardonnay, Pinot Grigio, Sauvignon and Merlot are the first ones; Friulano, Ribolla Gialla and Schioppettino, the latter. In the ancient village of Cladrecis our most structured, complex and long-lived wines – Cladrecis Chardonnay and Cladrecis Rosso – are born. The signature of all SIRCH wines is the bold and refined structure, the salinity which joins harmony and the long aromatic persistent finish.

SIRCH, the rediscovery of Friulian wines born from the respect of the territory. 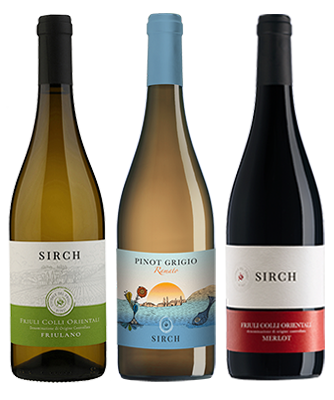 Fresh and crisp wines that express the best regional wine tradition and represent the modern vision of a story that is renewed in time, told with naturalness. 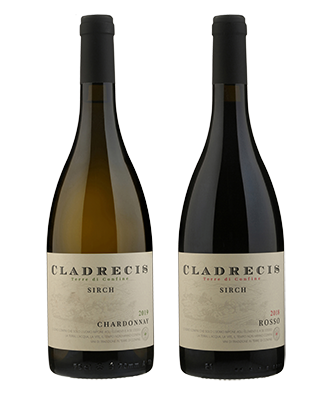 Wines of rare prestige that are born from the recovery of an ancient viticultural area in the DOC zone of Friuli Colli Orientali and enclose the essence of these lands, where unique natural elements meet. 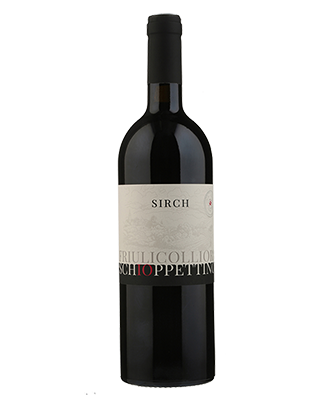 A “harmoniously explosive” wine, indissolubly linked to its land of origin: Prepotto. Here, climate, soil and local culture have given life to a real terroir. 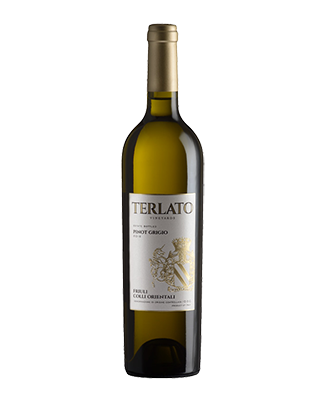 Wines that look far ahead without losing the sense of their origins: the foothills of the Julian Alps. Freshness in harmony with the sapid and full taste of these hilly lands.
Today, it is no longer the farmers who emigrate from Friuli to the Americas, it is the wines’ turn to travel, bringing the flavors of the Colli Orientali to the United States. 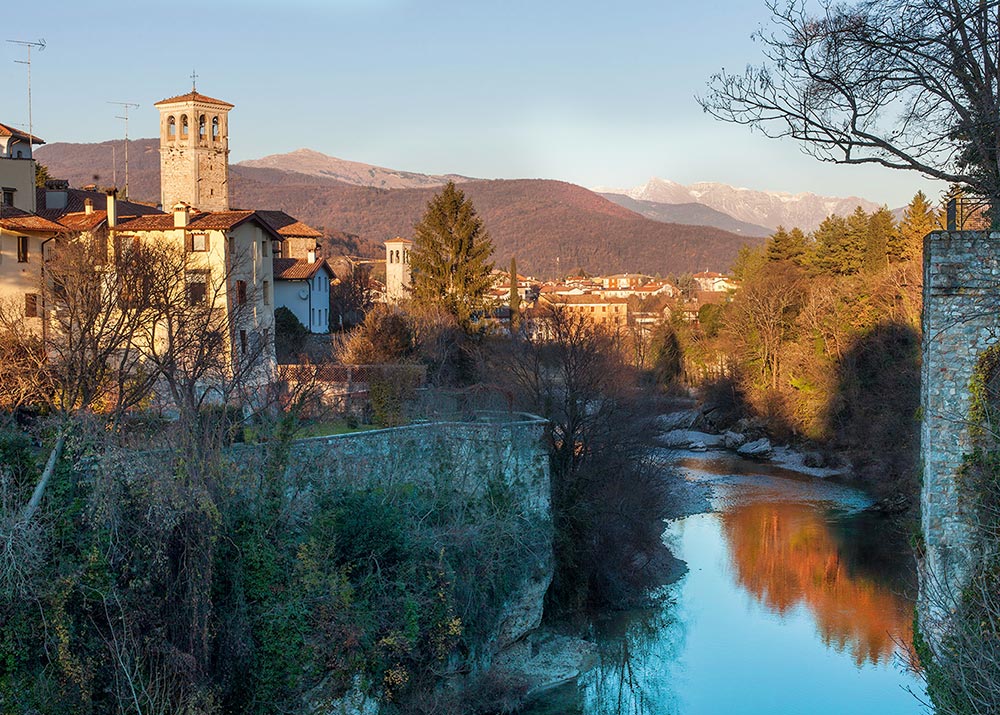 On the generous hills of eastern Friuli Venezia Giulia, the ancient Forum Julii, founded by Julius Caesar and now a UNESCO World Heritage Site, gives its name to the entire region. Here, in the midst of a landscape of outstanding beauty, lies SIRCH and its winery. Some historians from the past believe that if the Romans established a Forum here – i.e., a trading place – it was because wine was abundant and this facilitated the market in Cividale. Viticulture was already practiced here in the early Middle Ages, as can be seen from a document by Theodahad (534 A.D.) stating that Foro Julio paid tributes in wine. Grapes and vine shoots are also often represented in Lombard art. In more recent times, we find that at the Vienna Exhibition of 1873, Ribola 1869 white wine and Pinot 1871 red wine were sent from Cividale.
At the end of the 1800s, the district of Cividale was considered “A place with good exposure to the sun and one of the most productive districts”. In 1896, 20% of the production of wine grapes was white and 80% was red, as can be seen at the Exhibition of Wines, Liqueurs and Vinegars, organized by the local ‘Comizio Agrario’.
In 1939, Cividale organized a wine exhibition-competition in which producers from many parts of the province participated with great success. 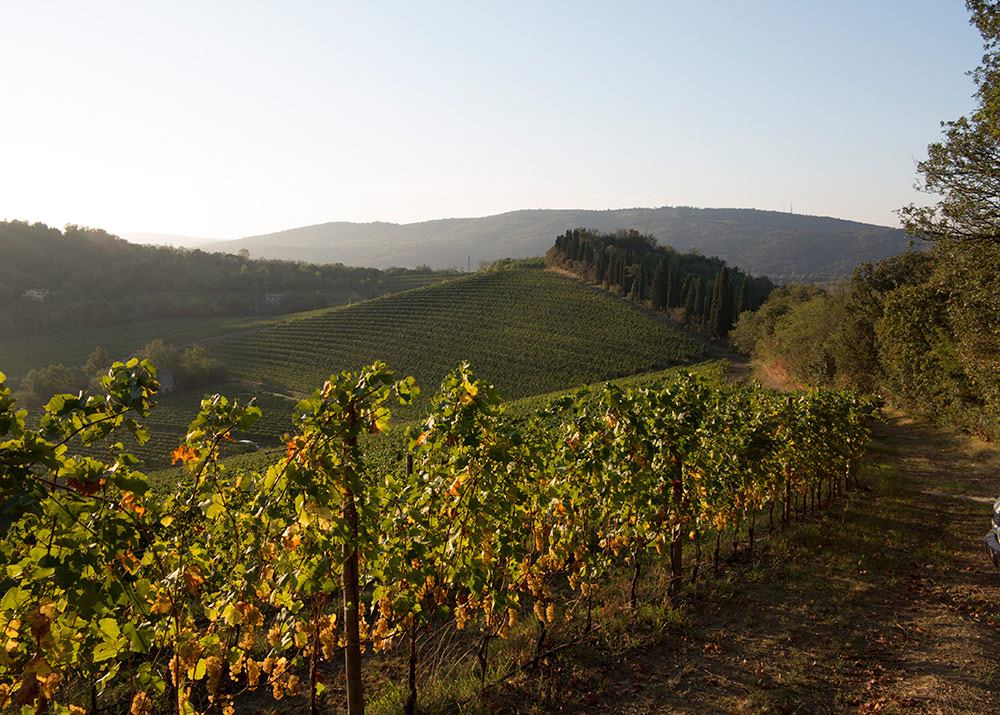 The small hamlet of Orsaria belongs to the Municipality of Premariacco, rich in Roman history and overlooking the banks of the Natisone river, which falls within the first band of the Friuli Colli Orientali DOC area. On these hills, SIRCH has its largest vineyard, which descends from the hill to the river bed: Orsàrie in plan.
In the “Libro dei Conti” (“Book of Accounts”) of the renowned artist Giovanni da Udine, we find that in 1536 Salvestro d’Orsaria paid him his debts in vin, while in 1558 one of his settlers paid for the rent of the braida d’Orsaria “Il vin ala mità oltre ad un carro di vencoli”, that is, bundles of vines that he brought to Udine – biomass for energy purposes, we would say today – committing himself to planting one hundred new vines every year.
In 1867, it was described as follows: “Its territory produces only wine and hay in the upper part; in the lower part, it is fertile with cereals, vines, mulberries and forages.” A few years later, we read that it is “The most productive region in Friuli, especially for fruit and vineyards, the latter, usually of white grapes, give very precious enological specialties, such as Ribolla di Cividale.” In 1888, a farmer from Orsaria presented the Uva lugliatica da tavola at an exhibition. 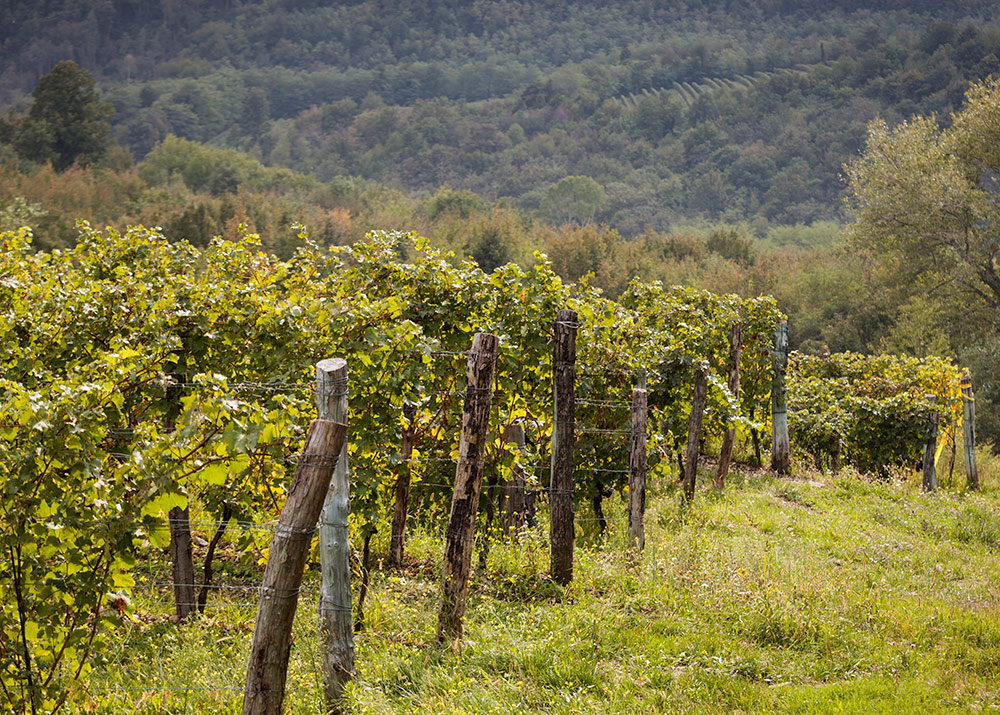 Friuli Venezia Giulia is a land with a vocation for the most diverse expressions of wine, and it is in the SIRCH production areas that the most renowned vines are concentrated: here the hilly marly soils are exposed to the infinite combinations that arise from the encounter between the breezes of the Adriatic and the fresh winds from the East. A precious gift from Nature that the hand of man assists and enhances. In keeping with the best traditions and the most up-to-date technical expertise, our vignerons work different areas with vines of varying age and mainly adopt the “guyot” method or the classic “double inverted” technique. 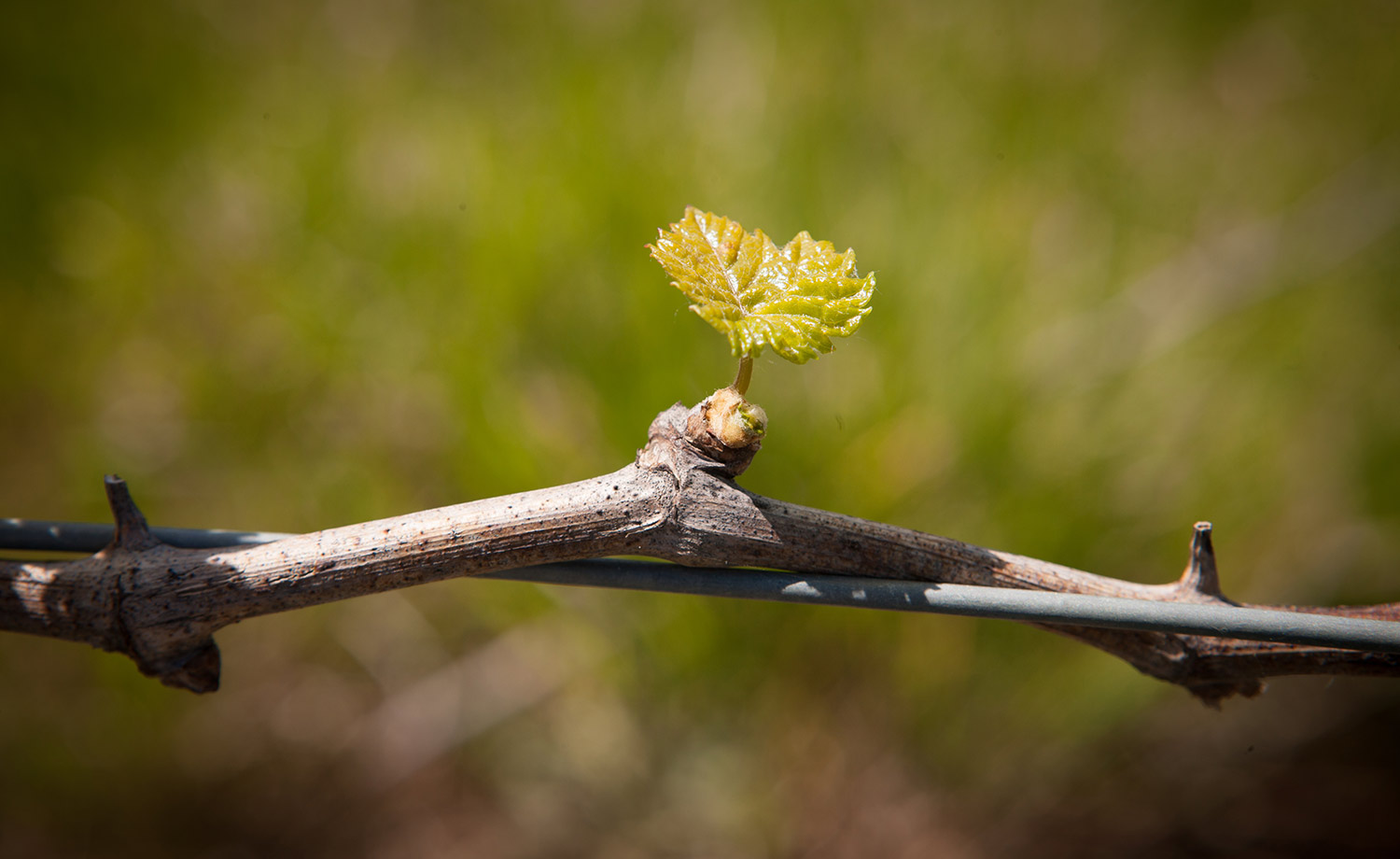 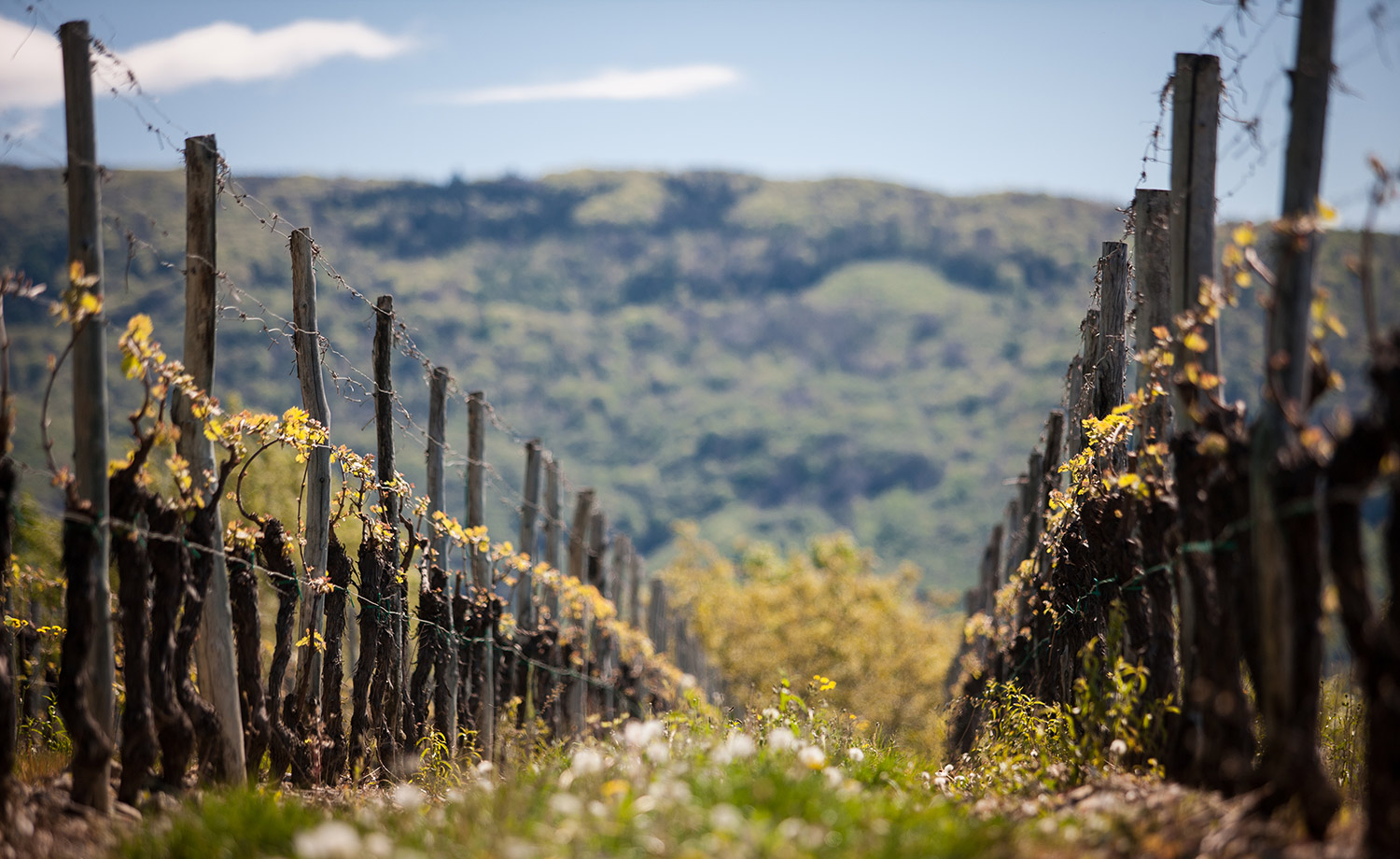